The political consequence of the 2008 banking crisis was a Conservative led coalition, whose principal economic policy was austerity. This meant a dramatic reduction in the size of the state, especially local government and Britain’s welfare system. Unexpectedly there was a reduction in resilience to disease amongst the impoverished. Covid-19 revealed this with lethal speed. The pandemic has disproportionately impacted on the poor weakened after ten years of austerity.

Pandemics require decisive political action beginning with banning sporting events. Italy began this action on 22nd February. In Britain, three weeks later, a horse race meeting at Cheltenham began with 60,000 attending on four consecutive days. They came from Britain and other countries. On the 11th March, Liverpool played Athletico Madrid with 50,000+ in attendance. Madrid was a known Covid-19 hotspot in March and thousands of Spanish football fans came without preventative health checks.

Covid-19’s lethal impact on the poor revealed Britain’s decrepit welfare system, which has worsened since 2010. A state welfare system should protect the impoverished from preventable death. The correlation of Covid-19 deaths with poverty signals failure. 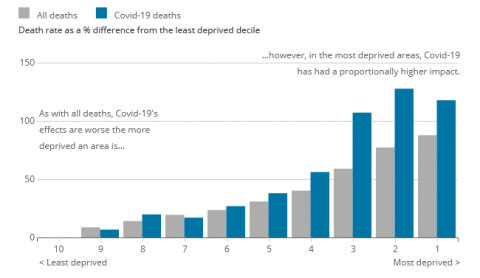 In 1904, the Conservative prime minister, Arthur Balfour, discovered the connexion between general health and macro-impacts. The macro-impact in 1904 was men unable to join the army because of malnutrition. The 2020 Covid-19 pandemic has revealed many British people are so unhealthy that the virus can be lethal. Lethal, not because of bad luck, but because of poverty. The matrix of poor diet, unfit housing, reductions in the benefit system and job insecurity cumulatively undermines resilience. (see addendum) None of this is happenchance. Osborne’s ‘Age of Austerity’ literally weakened the poor in Britain. The bleak outcome is Europe’s largest death rate.

The unintended consequence of the austerity economic policy has been lethal. Supporting those in poverty isn’t an option, it’s a principal role of government. Britain is the ‘Sick man of Europe’, because of government policy.

“The best protection against Covid – and, indeed, just about any disease is wealth. Wealth buys you nutritious food, clean water, safe shelter, temperature control, social status and space. Infectious diseases spread in overcrowded homes and workplaces, and kill those who are already unhealthy. The Covid death rate in poor areas of the UK is more than double that in rich areas. Wealth buys you, on average, an extra eight years of life and 20 more of disease free living compared to living in poverty.”** **

* Osborne left office in 2016 but his policy, in essence, remained.

For the spread of Covid-19 in Italy see https://en.wikipedia.org/wiki/COVID-19_pandemic_in_Italy

For ‘just about managing’ see https://www.jrf.org.uk/blog/who-are-prime-minister-mays-just-about-managing-and-what-would-help-them

For the introduction of free school meals see https://www.intriguing-history.com/school-meals-act/