The Ricardian Curse is normally associated with third world countries who are ‘blessed’ with a bonanza of wealth from natural resources. The ‘curse’ is that sudden increases in wealth negatively impact on the immature countries who often fail to effectively manage their vast increases in revenue for the good of the country. A typical immature response is to regard the windfall as a repeatable, reliable, revenue stream funding future expenditure. Astonishingly Margaret Thatcher behaved like the leader of a third world country when she became prime minister in 1979 not with Swiss bank accounts or increased corruption but by delusional political actions. Margaret Thatcher’s government squandered the North Sea oil bonanza on the ultimate economic black hole: war. Instead of the UK modernising Margaret Thatcher’s government acquired Imperialist delusions. The greatest delusion being that 1800 Falklanders (and their 400,000 sheep) were critical to British national pride.

Norway shares the same North Sea geology as Britain. Norway shared the oil bonanza and they invested their windfall. Consuming a natural resource as though it is an inexhaustible revenue source was rightly seen as disastrous by the Norwegians. Knowing that North Sea oil revenues would deplete to zero they made a long-term economic plan. The graph below, which covers the period from immediately prior to the Falklands war to the legacy years post-Thatcher, dramatically shows the decline in North Sea revenues. As the Daily Telegraph wrote:
“Just across the North Sea, the Norwegians took a different path. They chose to save the proceeds of oil drilling for future generations. The result is a sovereign wealth fund worth around $750 billion (£485 billion), which should comfortably top $1 trillion within this generation. It currently owns an estimated 1p in every £1 of world equity, which is a colossal stake in the global economy from such a small base, and is reckoned to be the largest owner of stock in Europe” 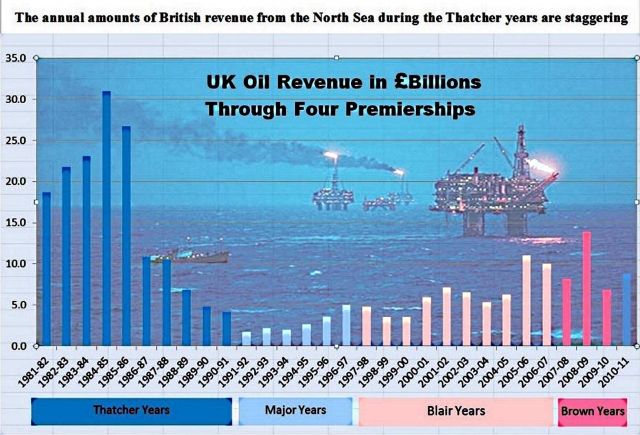 Margaret Thatcher worshipped Winston Churchill (a 19th century Imperialist). Her Imperialistic war came in 1982, with the defence of the Falkland Islands2. The war had an immediate cost of £941M. (Needless-to-relate Norway didn’t engage in the ultimate economic black hole that is war.) The war was won but the military-economic impact made it a pyrrhic victory3. Coinciding with the Falklands war the Thatcher government funded the replacement of the Polaris submarine system with Trident at a cost of £5bn. Mrs Thatcher’s Imperialism is reflected in her defence budgets for 1981-85. Defence cost £59.6 bn plus the £941m for the Falkland campaign plus Trident’s £5bn i.e. £65.54bn in total4. In the same period oil revenues were £95.4 bn (see above). The North Sea bonanza evaporated. A mere third was left (£29.86 bn) after war and wartime preparations were paid for. The opportunity for productive investment of £65.54 bn was lost in Margaret Thatcher’s desire to emulate Winston Churchill. Even worse was the psychological impact on future British politicians who unlearned the lessons from the loss of Empire in the 1950s and 60s. Declining North Sea oil revenues haven’t halted the desire for strutting the world stage as can be seen in UK5 involvement in Afghanistan, Iraq and, marginally, Syria over the 14 years (to 2016).

The North Sea oil bonanza was squandered in a blaze of wildly inappropriate and delusional actions by the Thatcher government in the period 1982-5. As the former (2010-16) Chancellor of the Exchequer George Osborne said about his economic policy ‘We are fixing the roof whilst the sun is shining’, which is clearly contrary to what his heroine Margaret Thatcher did in the bonanza years of North Sea oil.

3 1820 Falklanders and their 400,000 sheep were now a long-term commitment for Britain (8,000 miles away). For a discussion of nuclear submarines see http://www.barnettmaritime.co.uk/deterrence02.pdf
4 ttps://www.theguardian.com/news/datablog/2012/apr/17/military-spending-countries-list
5 The UK population is circa 12x that of Norway but their casualty figure is 10 dead in comparison to 454 for the UK which is approximately four times as great pro rata.