Traditionally work was regarded as a necessity. This is challenged by constant improvements in technological devices and strategies. Entire sectors of employment have disappeared. The changes cause immediate pain through unemployment, which is the price of economic innovation. Constant technological innovation is sometimes called ‘creative destruction’ and is the principal feature of developed economies. Technological disruption is embedded in the economies of developed countries. Ultimately everyone has a better life.

Aristocrats in Downton Abbey employed many servants. They were essential to aristocratic households, facilitating daily life. Servants were also integral to middle-class life. Employing live-in servants was normal until the First World War.

Domestic service, such as maids and cooks in private households, accounted for about 9 percent of non-farm employment in 1915;1

Dad’s Army3 star personality was the bank manager, Captain Mainwaring. Technology has destroyed his banking world.4 The ubiquitous ATMS and online banking makes his world ridiculous, all of which is a significant improvement. The jobs lost in this disruption are obvious. Thousands of bank branches have closed. When cash disappears from retail transactions this will destroy jobs in transport and security.

These areas are exceptionally vulnerable to technological disruption. The British 1980s Miners’ Strikes led to the oblivion of barbaric deep seam mining 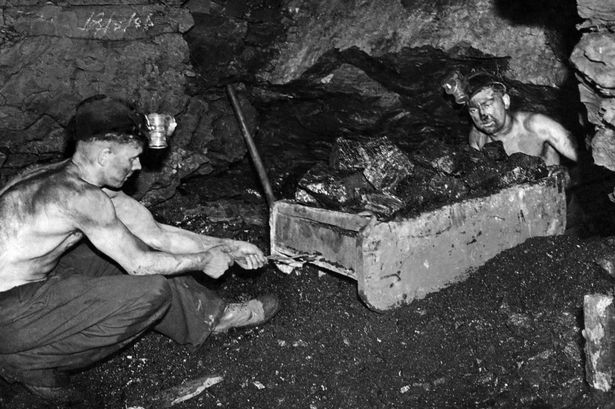 It inflicted diseases and injuries on miners. Coal miners’ children are infinitely better off not following their fathers ‘down the pit’. Nonetheless mining was fiercely defended as a ‘way of life’. Rationally, its demise should have been welcomed. Long hours5 and brutal working conditions have effectively disappeared (see addendum).

Conclusion: the direction of travel

Two relatively recent phases are significant. Firstly the 18th Century industrialisation of Britain and then the late 19th Century emergence of electricity. The acceptance of IT and artificial intelligence are the same direction of travel. Vested interests try to defend the status quo.6 If they succeed, the world will be worse. Work should be an option not an obligation: a leisure activity. The historic reduction in the working week with a shorter working year offers guidance in this.7 A Universal Basic Wage8 would operate like a pension without being age related. People can take the money and work as well, or just occupy themselves in any other way they wish with a lower standard of living.

Addendum: Changes in sectoral employment in the UK 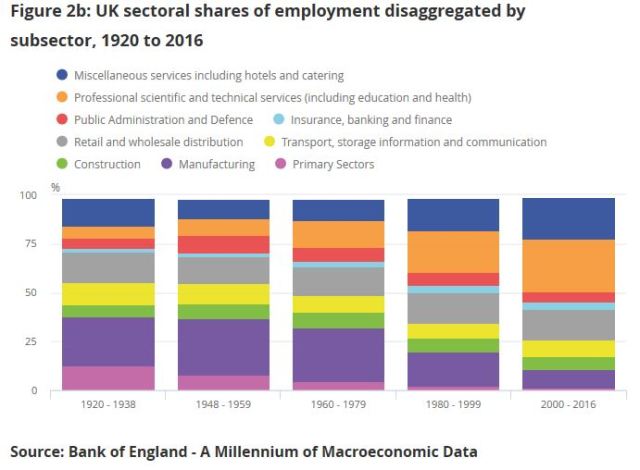 2 An article on the working-life of servants, https://www.historyextra.com/period/victorian/real-downton-abbey-19th-century-servants-life-upstairs-downstairs-maid-butler/

3 Dad’s Army was a BBC TV sitcom, which was wildly popular between 1968 and 1977. Downton Abbey is a world-wide success story.

6 The British high street is suffering from these changes but the notion of shops being essential has surely disappeared. The high street is now a leisure destination as can be seen from the growth of restaurants, nail bars and so on.

8 https://www.theguardian.com/commentisfree/2019/may/06/universal-basic-income-public-realm-poverty-inequality This discussion focusses on the scale of the wage paid. To move into a post-wage economic environment would need a payment sufficient to have a non-poverty life-style.

This entry was posted in Economics, History, statistics, Technology and tagged creative destruction of jobs, impact on employment by technology, technology. Bookmark the permalink.