Prior to the 2016 referendum, Euro scepticism was a niche activity for a handful of Conservative MPs and Nigel Farage’s UKIP. David Cameron was spooked by him and called a referendum, which he lost. The period 2016-9 has been a disaster for the Conservative party. Fanatical Conservative MPs have taken control. Johnson is the third PM to suffer this shift to extremism.

Table One: the Peterborough election result 2017

The impact of turnout on results

Fiona Onasanyu, the 2017 victor in Peterborough, proved that democracy is about who turns up to vote. The Labour vote increased by 12.5% but the losing Conservative MP also increased his vote by 7.5% (see table above). The sitting Conservative MP was more popular in 2017 than he’d been in 2015 but it wasn’t enough. Fiona triumphed and was consumed by hubris.

She was disgraced, jailed and lost her seat. This caused a by-election in June 2019. The Conservatives were confident they’d regain the seat. They’d held Peterborough more or less continuously since 1929, losing in 2017 by a mere 607 votes. Peterborough had become an ultra marginal and, with the Labour party in disarray, success seemed certain. But the formation of the Brexit party in January 2019 shattered every calculation. Labour won a narrow victory leaving the Conservative party in tatters. The Conservatives were out-flanked to the right.

The Brexit candidate came within 683 votes of winning Peterborough from a standing start. He took votes from both major parties. The Conservatives lost 25.5% on their 2017 vote and Labour shed 17.2%. A huge loss, which in normal circumstances would have led to defeat, but in an extraordinary twist was just enough to give Labour victory. Labour’s Lisa Forbes won with just 30.9% of the vote (see table below). 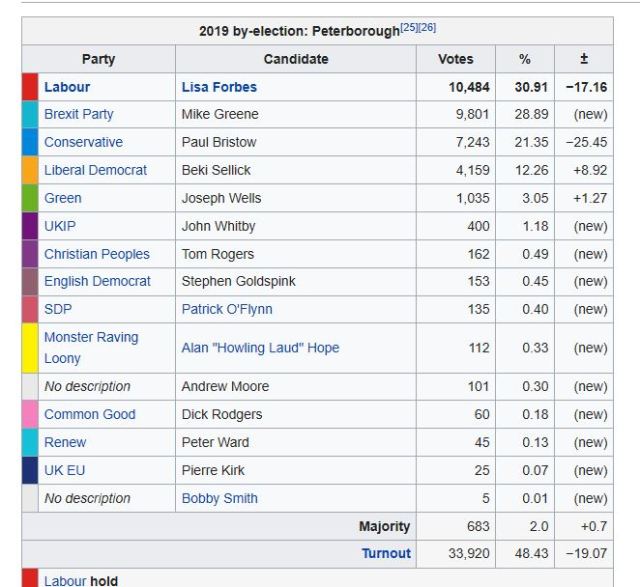 The impact of the Brexit party on the result.

The Brexit party is Boris Johnson’s nightmare. It’s turned elections into lotteries. The Brexit party is a single issue party with all the unambiguous certainty that that implies.If there is an election in 2019 Johnson will try to avoid framing it as a Brexit election because they have all the best lines.

This entry was posted in Politics, statistics and tagged break up of binary politics in UK, importance of turnout in politics, pressure group politics. Bookmark the permalink.