Alexey Stakhanov: the most famous coal miner in history 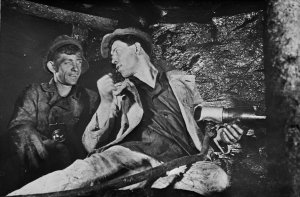 Stalin introduced a whirlwind of industrialisation in a series of Five Year Plans beginning in 1928. These plans centralised control of every part of industrial production. Every mine had productivity targets which had to be met or exceeded. This translated into individual targets for miners. Failure usually led to denunciation as a wrecker, which could lead to imprisonment in a Siberian Gulag, or a death sentence. Stakhanov was, in 1935, a true believer in the importance of exceeding targets. The scene was set for a coup de theatre. Stakhanov’s stupendous record-breaking achievements were carefully choreographed. Once achieved, Stakhanov epitomised Soviet industrial man.

In August 1935 Stakhanov exceeded the individual target for miners by a massive 14 times by digging 105 tonnes in a single shift. The following month he broke this record with 227 tonnes. His achievements weren’t happenchance. Stakhanov’s record breaking efforts were choreographed. His equipment was properly maintained, unusual in Soviet mines in the 1930s. He was hewing a thick seam, which is ideal for coal miners and he was assisted by two experienced miners. (In the subsequent publicity their role was ignored.) Performing like an Olympic athlete, Stakhanov broke world records and was rightly lauded across the world. A peak performance in a moment of time. 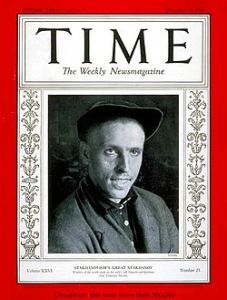 Stalin awarded Stakhanov the Order of Lenin.1 Much more importantly he became a motivator for workers throughout the Soviet Union. His dedication was emulated in the Soviet Union’s industries. The momentum he created became known as the Stakhanovite Movement.2 Stalin created a personality cult around Stakhanov complete with ideological interpretation. Stakhanov, however, couldn’t possibly have broken records during a normal working day. That was irrelevant. What mattered was a Soviet worker had demonstrated that Soviet man motivated by patriotism had produced a stupendous level of output. It was a coup for the Soviet Union. 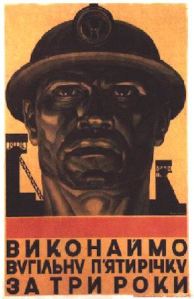 Poster for the Stakhanovite Movment

The Stakhanovite Movement attracted many workers who were motivated by the idea of fame and fortune in addition to patriotism, although that shouldn’t be underestimated. Everyone saw that Stakhanov had become a celebrity and this was a very attractive incentive. But record breaking attempts distorted the day-to day organisation of the industries involved. Such attempts depended on specific planning to make sure that there was a possibility of success and therefore, perversely, hampered productivity. Record breaking attempts had to be organised which disrupted day-to-day production. They were a distortion.

Coal mines have thick, easily worked, seams but they also have dangerously thin seams prone to roof falls. A 55 year old Stakhanov, working a thin seam, definitely couldn’t have achieved his basic target, never mind exceed it 14 times. In a metric dominated society where the price of failure could be death, managers were incentivised to game the system (see addendum). Targets were hard baked into the Soviet system. Soviet managers only increased targets, regardless of whether they were achievable or not. Impossible targets created to irresistible pressure leading directly to deceitful reporting. Basing productivity benchmarks on elite workers working in optimum conditions is a managerial fallacy.

Stakhanov and the Stakhanovite Movement are a fascinating insight into Stalin’s rule. Grotesque carrots and sticks led to productivity gains but more could have been achieved with a Soviet version of Taylorism3. The Soviet inferiority complex and Stalin’s paranoia about those around him prevented new ideas, except that belonged to his world view. Stakhanov endorsed Stalin and Stalin endorsed Stakhanov. The Second World War prevented the inherent flaws in the Stakhanovite Movement from being revealed and so it retained its cache for many years.

The dying embers of the Stakhanovite Movement happened in 1978 when the town of Kadiyevka changed its name to Stakhanov.

Perhaps the crowning glory was the Uzbek cotton scandal, wherein local Party boss Sharaf Rashidov and a slate of Party and government officials in the central Asian republic of Uzbekistan, including the local KGB, were involved in a decade-long scam that embezzled some three billion rubles in payments for cotton that was never harvested, from fields and farms which did not exist. Claiming uncharacteristic efficiency and discipline, reports flowed back to Moscow of new irrigation networks dug, new fields planted and productivity records shattered. No wonder cotton was known as ‘white gold’, as thanks to the connivance of co-conspirators in Moscow… they were able to conceal the minor detail that none of this alleged harvest actually existed.

In New York State, for example, the report cards on post-operative mortality rates for coronary bypass surgery, that is, what percentage of the patients operated upon remained alive thirty days after the procedure. After the metrics were instituted, the mortality rates did indeed decline- which seemed like a positive development. But only those patients operated on were included in the metric. The patients who the surgeons declined to operate on because they were more high risk- and hence would bring down the surgeon’s score- were not included in the metrics.4

2 For an interesting short discussion of the Stakhanovite Movement go to http://soviethistory.msu.edu/1936-2/year-of-the-stakhanovite/ See also the connexion with the Great Terror 1935-8 https://www.cambridge.org/core/books/stalinist-terror/stakhanovite-movement-the-background-to-the-great-terror-in-the-factories-19351938/8369F48E144C411664BFFF1C85378820