Chamberlain’s policy of appeasement failed in 1939 and was replaced with something worse. He decided Britain was a lion. Chamberlain threatened Hitler with war if Germany attacked Poland. The German High Command knew Britain couldn’t defend Poland and Hitler believed the ultimatum was empty rhetoric. However, he took precautions. In a diplomatic coup on 23rd August, 1939 Germany signed a treaty with the Soviet Union. Hitler was astonished when Chamberlain ratcheted up his position by making further commitments to Poland two days later. Britain declared war on the 3rd September, 1939.

Britain’s policy of appeasement*conceded Hitler’s grievances over the treaty of Versailles. Appeasement led to a series of capitulations ending in March, 1939. Germany’s triumphant diplomatic ‘conquest’ of Austria and Czechoslovakia demonstrated that Hitler’s demands would always increase. Chamberlain’s response to Czechoslovakia being subsumed into Germany was to sign a treaty of mutual defence with Poland. This was meaningless militarily.

The geography of Chamberlain’s Polish commitment

Nazi Germany’s domestic policy was violently anti-communist**. So the Molotov-Ribbentrop treaty, 23rd August, 1939 was a bolt from the blue. At a stroke, the military situation in central Europe was transformed. 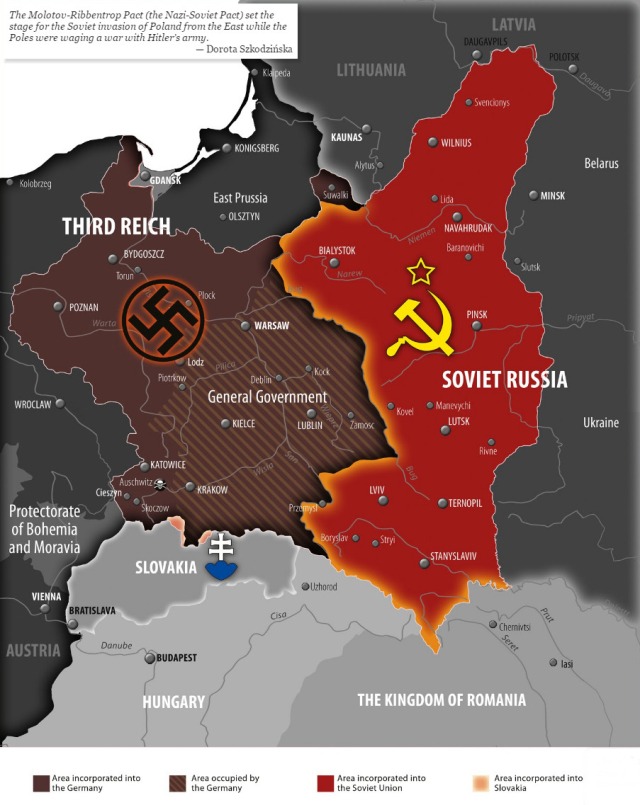 Poland was impossible to defend from two powerful countries intent on expansion. Chamberlain should have acknowledged this stunning piece of Realpolitik and changed his policy. But he’d been humiliated and quixotically strengthened Britain’s commitment to Poland.

The day before Chamberlain declared war, he moved an army into France and a month later “…. 152,031 soldiers, 21,424 vehicles and all the necessary weapons and stores had arrived in France.“ Hitler invaded Poland with 1,500,000 men. The Soviet Union deployed 700,000 soldiers in their attack from the east. Poland disappeared. Meanwhile Chamberlain fretted. Britain did nothing and the Phoney War began lasting until Hitler conquered western Europe in spring 1940.

Hitler saw Britain’s commitment to Poland amounted to nothing and assumed they wanted a painless exit. A separate peace was Germany’s preferred option and they knew there was support for this within Chamberlain’s Conservative party***. Germany’s Foreign Secretary, von Ribbentrop, felt there wasn’t an appetite for war amongst Conservatives because he knew many of them personally.

Neither Hitler or Ribbentrop bargained for Leo Amery and other patriotic Conservative MPs. They were outraged by Chamberlain’s inability to lead or resign. In a coup de theatre, Amery denounced the entire conduct of the government during the eight Phoney War months****. Until that speech, Hitler’s calculations were sure footed but he then lost control of the narrative. War would have to continue until Britain was defeated, which could only be done through invasion. For obvious reasons, the all conquering Wehrmacht was neutralised by the English Channel. An amphibious attack, code named Sea Lion, was an aspiration rather than a realistic option. Britain remained undefeated in 1940 with a dynamic leader, Winston Churchill.

Every German general studied Clausewitz’s Vom Krieg. He said the principal difficulty of success in war was, what he called, The Fog of War. Once war began, certainty ended. Therefore regardless of brilliant planning, logistical superiority and other advantages, the unexpected could still cause defeat. Bismarck, Germany’s greatest strategist, applied Clausewitz’s insights in three triumphant limited wars. The German High Command was fully aware of Clausewitzian theory and the Bismarckian application and ignored the lessons. They fed Hitler’s hubris.

Hitler’s reaction to Chamberlain’s ultimatum was rational. He ignored it. Chamberlain’s commitment to Poland was ludicrous and unachievable. A separate peace was the obvious solution in Spring 1940 and Hitler couldn’t believe its rejection. From that point onwards, Germany’s military momentum replaced calculated decision making. Hitler was successful until he and his generals ignored the Fog of War.

** The first concentration camp, Dachau, was for them and other political opponents.

For an analysis of the Ribbentrop-Molotov treaty see my https://oedeboyz.com/2016/04/15/the-ribbentrop-molotov-pact-1939-bismarcks-final-triumph/

For a quick summary of Chamberlain’s pre-war policy see https://en.wikipedia.org/wiki/Neville_Chamberlain

For the Phoney War see https://www.historylearningsite.co.uk/world-war-two/world-war-two-in-western-europe/the-phoney-war/

For a separate peace see https://www.historynet.com/britain-made-peace-hitler.htm

For an utterly compelling and brilliant speech by Leo Amery see http://www.ukpol.co.uk/leo-amery-1940-speech-in-the-house-of-commons/

This entry was posted in History, Philosophy, Politics, War and tagged appeasement, Clausewitz, Second world war, the fog of war. Bookmark the permalink.