Irish terrorism in London in the 1990s 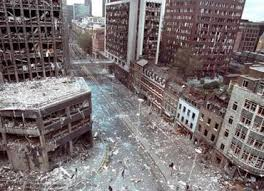 The destruction of Bishopgate in the city of London 1993

The British government responded to these atrocities by erecting a ‘ring of steel’ in the city of London. Streets were cordoned off, narrowed and guarded by armed police.

This entry was posted in Politics, War and tagged armed police, British civil war in 1990s, IRA atrocities, ring of steel, the city of London. Bookmark the permalink.