Anchorites: The Search for Perfection

St. Benedict’s Rules (530 AD) were the first to be widely adopted by monasteries . These governed every aspect of a monk’s life. Intensely religious people, both men and women, wanted a purer religious experience without distractions. These people wanted to live entirely in the presence of God and they became anchorites, a form of hermit. Anchorites were walled into a cell built within a church and remained there until they died.

The Rules of St. Benedict are comprehensive. They were formulated into 73 chapters covering every eventuality of a monk’s life*. Famously Benedict ordered monks to attend church services at three hourly intervals throughout the day, making eight in all. These were
Matins (midnight), Lauds (3a.m.), Prime (6a.m), Tierce (9a.m.), Sext (noon), Nones (3p.m.), Vespers (6p.m.) and Compline (9p.m.)**.
A regulated life meant monks fulfilled an externally imposed performance of a religious life with the expectation of access to Heaven. Anchorites believed that a rule based relationship with God was insufficient. They believed that a solitary life of contemplation was a better route to God’s favour. Matthew 23:27 denigrates ostentatious outward virtue which could can inner corruption. Matthew in essence said that a monk could be perfect, in terms of obedience to rules and also be evil, a deeply worrying possibility for the intensely religious.

St Benedict was aware that the rigours of an anchorite’s life were only suitable for committed and mature men and women. Anchorites should be those,
not in the first fervour of conversion, but after long probation in the monastic life, have learnt to fight against the devil, and taught by the encouragement of others, are now able by God’s assistance to strive hand to hand against the flesh and evil thoughts, and so go forth well prepared, from the army of the Brotherhood, to the single combat of the wilderness***. St Benedict’s rules instilled discipline. They were ruthlessly precise and prescriptive but the most fervent wanted more. Anchorites wanted religious intensity which went beyond obedience to rules. Their piety would be expressed by a total denial of the temptations of society and the flesh. 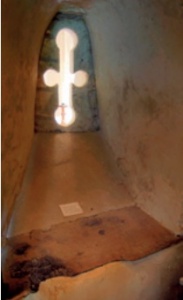 The ‘squint’ window from inside the anchorites cell

Anchorites had themselves walled up in a cell in churches, especially in the 13th century. One of their three windows (the squint) was focused solely on the church altar; the only visible part of the church interior. The other two allowed access to visitors (and their servant) who sought advice. Advice was sought because anchorites were believed to have wisdom due to their continuous divine communion. For practical purposes they also had to have a servant who was required to bring food and remove waste, and to attend to visitors****. Anchorites had to be either independently wealthy or have wealthy sponsors. Support was obligatory before the Church would accept an anchorite. Anchorites were authorised by the Church as they were exceptionally holy and were a visible expression of holiness. The Church was as committed to an anchorites vocation as the anchorite themselves. However anchorites had to stay holy, meaning that their only exit from their cell was death.

The intensity of medieval religious experience varied. Virtually everyone led a meaningful religious life with attendance at Church being the bare minimum. Gifts to churches and monasteries meant that they were very wealthy. Entering a monastery (or convent) was unexceptional, especially for wealthy women and for careerist men. However intensely religious people saw the inherent challenges of monastic wealth and careerist monks. Intensely religious people wished to revert to the principal aim of monastic life and became anchorites. They rejected monastic society and a rule controlled life. Once anchorites were in their cell there were no distractions and they lived the pure religious life they craved.

*see the website http://www.osb.org/rb/text/toc.html for a comprehensive outline in English. This site is wonderfully interesting and is recommended for a quick (or a slow) browse.
**The impact of sleep deprivation is very interesting and it appears that there is a distinct impact on cognition especially higher levels of decision-making see for further discussion- http://www.ncbi.nlm.nih.gov/pubmed/21075236
***Life of Our Most Holy Father St Benedict in Christian Classics Ethereal Library
****Hermits and Anchorites of England Univ. of Exeter website