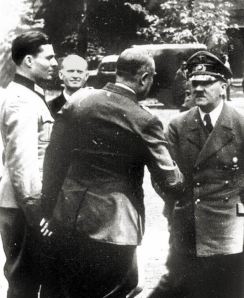 Wolf’s Lair (Wolfsschanze) was impregnable. It was Hitler’s headquarters in northern Poland, or Grosse Deutschland as he put it. It was impregnable to everything except treachery. On the 20th July 1944, Claus von Stauffenberg tried to commit that treacherous act. Von Stauffenberg and his co- conspirators were senior Werhmacht* officers. They believed that only with Hitler’s assassination could Germany secure peace on the Western Front. This would leave the Wehrmacht to focus on the Soviets. Assassination, in this case, was treason. Their argument in favour of Hitler’s assassination was that he was a failed military leader. But he survived and the conspirators were hunted down either committing suicide or suffering horrific execution. This attempted assassination was purely ‘technical’: an effort to facilitate the Wehrmacht’s war effort.

Hitler was voted into power in 1933 and the Wehrmacht ‘fell in love’ with him. He promoted German expansion and the Wehrmacht regained the prestige they had lost in 1918. During three years of annexations, the Rhineland, Austria and Czechoslavakia fell to German intimidation. The despicable Molotov- Ribbentrop Treaty (August 1939) led to a triumphant Wehrmacht sweeping all before it in Poland. Western Europe followed swiftly in 1940. The Wehrmacht was in its seventh heaven. The Wehrmacht and Hitler felt invincible.

The German attack on the Soviet Union was a step too far. Learning nothing from Napoleonic history, or from Germany’s greatest strategist Bismarck, Hitler invaded the Soviet Union in June 1941. To make defeat certain, Hitler also declared war on the USA in December 1941. Spring 1944 brought the knowledge that Germany was defeated and would be invaded by the ‘sub- human Slavic hordes’ of the Soviet Union. Adolf Hitler was not seen as a morally bankrupt, odious monster by the Wehrmacht but as a failed military leader who was ruining their reputation for invincibility.

Von Stauffenberg’s attempt was hugely courageous but it was not motivated by moral distaste**. All the German armies were deeply implicated in horrific acts of brutality. The Wehrmacht also maintained Nazi rule in all the conquered territories just as much as the infamous SS. The attempted assassination was, to paraphrase The Godfather, ‘business’. It was not an act of resistance to Nazi rule: it was an attempt to ‘improve’ one aspect of that rule.

The attempted assassination of Hitler was not motivated by morality. The Wehrmacht whole- heartedly supported Hitler until his deeply flawed military judgement led Germany to the brink of defeat. History has been kind to von Stauffenberg as the man who came closest to assassinating Hitler. For political reasons the post- war German government lauded von Stauffenberg. He provided a fig- leaf for the disastrous lack of German resistance to Hitler and so in 1980 the German Resistance Memorial Centre was opened, featuring (amongst others) von Stauffenberg. A Nazi warrior was lauded as a hero of German resistance to Hitler!

Claus von Stauffenberg’s assassination attempt was motivated by military and political considerations. Given both his and his co- conspirators’ physical and moral courage, I think he should be called a ‘hero’. But it is obvious that if Germany had survived the twin Soviet and US counter- attacks then the Nazi media would have denounced the assassination attempt as a murderous attempt. And that position is both plausible and rational.

* The German Army
** The von Stauffenberg brothers, “basically approved of the racial principles of National Socialism (nazism) but considered it to be exaggerated and excessive.” Quoted in Wikipedia, Jeremy Noakes, Nazism, Exeter U.P 1998 p633