Neville Chamberlain: the unsung hero of the battle of Britain

Chamberlain was the towering political figure in Britain in the 1930s. From late 1931 to May 1940 Chamberlain shaped Britain’s domestic and foreign policy. He was tough-minded, adroit and successful. Without Chamberlain’s political courage the battle of Britain would have been lost. His policy of rearmament made the RAF a modern fighting force able to out-muscle the Luftwaffe. Whilst he was chancellor*, he increased income tax and authorised a huge loan for rearmament. The bulk of that loan went to the RAF and was intended to be a deterrent to Nazi Germany. He absolutely wasn’t a hapless victim of Hitler’s cunning in 1938.

Chamberlain became chancellor in 1931 and became a political demi-god. Chancellors were unencumbered by meddling or dissenting prime ministers and other senior Cabinet colleagues … between 1929 and 1937… their authority within the core executive was immense**. He was faced by deflation and mass unemployment. Both eroded the tax base and so he decided to reduce expenditure to ‘balance the books’. Because deflation increases spending power he reduced unemployment benefits. He knew this would cause a crisis for Labour cabinet coalition members and strengthen Conservative control of the government. Within three months he’d split the Labour party***. This was to matter enormously when he raised taxation in 1936 and increased the national debt in 1937 to pay for rearmament. Rearmament was essential. As can be seen, the RAF was becoming obsolete because of pacifism. 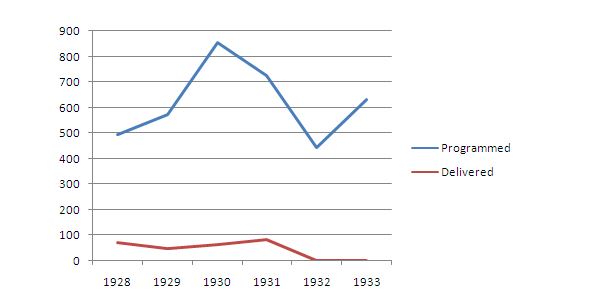 The RAF’s decline in the era of pacifism

Number of aircraft programmed for delivery and actually delivered 1928-33****

Chamberlain’s domination of parliament came to the fore with the financing of rearmament. The 1937 £400M loan for rearmament was a pivotal moment*****. Chamberlain confronted pacifist MPs, pro-Nazi MPs and fiscally austere MPs. In a long and withering speech Chamberlain described the new realities. “When I announced a few weeks ago that it was the intention of the Government to introduce a Bill authorising them to raise £400,000,000 for purposes of Defence, the right hon. Gentleman the Leader of the Opposition said that this was a proposal unprecedented in time of peace. I am not disposed to disagree with the right hon. Gentleman about that.******” He went on to describe the proposal as, “a Measure for the preservation of peace.” The £400M was doubled in 1939, the year after his so-called appeasement of Hitler at Munich. Chamberlain understood Hitler’s militarism and financed Britain’s defences accordingly. Additionally he raised income tax by 22% in 1936 and a further 36% in 1939. Chamberlain wasn’t a ‘worm’. He believed in rationality. 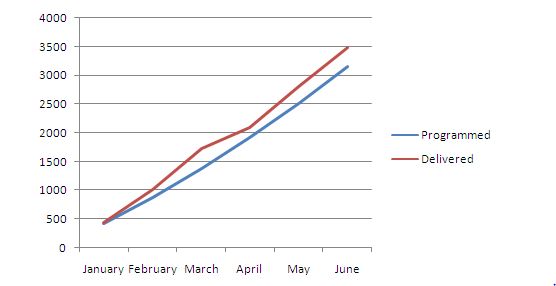 Number of aircraft programmed for delivery and actually delivered 1939****

Chamberlain’s reaction to Hitler’s invasion of Czechoslovakia, March 1939, was characteristic. Appeasement wasn’t weakness for Chamberlain, it was a rational response. “… no greater mistake could be made than to suppose that, because it (Great Britain) believes war to be a cruel and senseless thing, this nation has so far lost its fiber that it will not take part, to the utmost of its power, in resisting such a challenge.”******** Hitler was the one who lacked political nuance and it was Hitler who was defeated ultimately.

Chamberlain used his political domination of parliament to create the modern RAF which defeated the German onslaught in 1940-41. The aircraft were in place, as was the infrastructure and when the time came, they out-muscled the Germans. Chamberlain is the unsung hero of the Battle of Britain.

“At the lynch-gate we may all pass our own conduct and our own judgments under a searching review. It is not given to human beings, happily for them, for otherwise life would be intolerable, to foresee or to predict to any large extent the unfolding course of events. In one phase men seem to have been right, in another they seem to have been wrong. Then again, a few years later, when the perspective of time has lengthened, all stands in a different setting. There is a new proportion. There is another scale of values. History with its flickering lamp stumbles along the trail of the past, trying to reconstruct its scenes, to revive its echoes, and kindle with pale gleams the passion of former days.
“What is the worth of all this? The only guide to a man is his conscience; the only shield to his memory is the rectitude and sincerity of his actions. It is very imprudent to walk through life without this shield, because we are so often mocked by the failure of our hopes and the upsetting of our calculations; but with this shield, however the Fates may play, we march always in the ranks of honour.
“Whatever else history may or may not say about these terrible, tremendous years, we can be sure that Neville Chamberlain acted with perfect sincerity according to his lights and strove to the utmost of his capacity and authority, which were powerful, to save the world from the awful, devastating struggle in which we are now engaged….
“Herr Hitler protests with frantic words and gestures that he has only desired peace. What do these ravings and outpourings count before the silence of Neville Chamberlain’s tomb? Long, hard, and hazardous years lie before us, but at least we enter upon them united and with clean hearts….
“He was, like his father and his brother Austen before him, a famous Member of the House of Commons, and we here assembled this morning, members of all parties, without a single exception, feel that we do ourselves and our country honour in saluting the memory of one whom Disraeli would have called ‘an English worthy’.”
* He died 9th November 1940. History hasn’t been kind to Chamberlain but Churchill was at his glorious rhetorical best in this moment rising above petty point scoring. He took time for this eulogy in the middle of the German Blitz, which began in September 1940.

**** Article by Martin Waligorski http://spitfiresite.com/2010/04/from-peace-to-war-royal-air-force-rearmament-programme-1934-1940.html
***** £400M was an unprecedented figure for peacetime. It massively dwarfed the emergency £100M loan the Labour government had authorised for unemployment. This loan was derided by Chamberlain in his speech much to the chagrin of Attlee, “[Attlee] said that £100,000,000 was the price of keeping people alive and the other, £400,000,000 for weapons, was the price of blood.”